Like Native Americans, 51 AD Celts lived in diverse and scattered tribes that practiced an earth-centered spirituality with respect for the land and its spirits—relevant to readers facing global warming, extinction of species, obliteration of ethnic cultures, and the accelerating loss of wilderness. 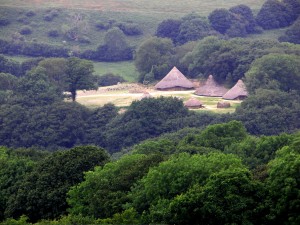 Interwoven is the persistent Celtic belief in an afterlife, journeys to an unseen Otherworld to discover the mysteries of the universe.

This reconstructed Iron Age settlement in western Wales was built exactly   on the site of an actual Celtic hillfort –post hole for post hole– where people lived for a good 600 years.

Only four of the dozen roundhouses were made, but the construction and orientation are authenic replicas of the original structures. The characters in Scarstone live out their story in such landcapes as this, and thanks to the brilliance of recent archaeologic discoveries, the details of their 51AD world (terrain, fabrics, foods and herbs, metal smithing, boats, et cetera) are also authentic. In this blog I will share the discoveries that inspired my Celtic fantasy novel and spurred further travels from Cornwall to Loch Awe in Argyll, Scotland. I invite you to return to this site and join in the telling.